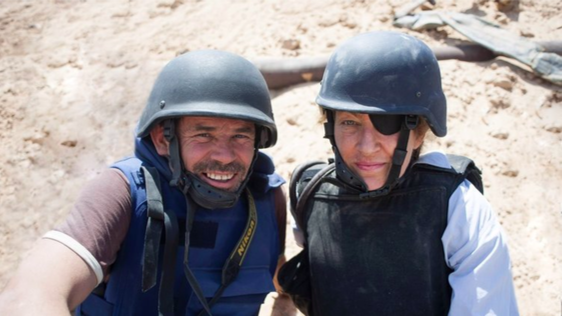 On 12 February 2012, two journalists entered war-ravaged Syria. One of them was celebrated Sunday Times war correspondent, Marie Colvin. The other was photographer, Paul Conroy. Their aim was to cover the plight of Syrian civilians trapped in Homs, a city under siege and relentless military attack from the Syrian army. Only one of them returned.

This feature length drama-documentary tells the epic story of what happened to Marie Colvin and Paul Conroy in Homs. One of the most dramatic stories yet to emerge from the Arab Spring, and the pivotal event in the tragedy of modern day Syria. A gripping account of bravery, heroism, and the triumph of the human spirit in the face of overwhelming and horrific adversity.

The testimonies of those involved, woven together with never-before-seen archive footage and in the moment filming, goes deep into the intense, tragic drama of Conroy and Colvin’s journey into Homs and Conroy’s incredible escape from the city. A chilling, moment-by-moment, journey into the depths of hell.

Based on the book “Under the Wire” by Paul Conroy