The question at the heart of the Screening Rights initiative, and that has become my mantra in various research n’ outreach settings, is: ‘What is the potential of film to affect personal, social and political change?  Here, in Ramallah, it takes on special meaning for me as the compulsory ‘located-ness’ of those asking the question and the burdens of those needing such change are particularly present and even poignant. I’ll say more on the latter especially as the weeks go on. 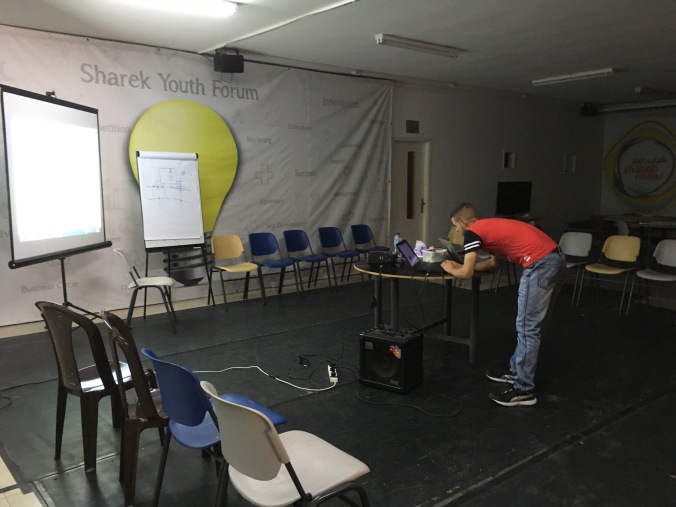 Getting ready for the first workshop at Sharek in Ramallah

The filmmaking project that I am running here is in collaboration with Sharek Youth Forum (http://www.sharek.ps/). Sharek aims ‘to make young Palestinians aware of their vital role in Palestinian politics, foster a sense of community service and volunteerism, give them the skills to carry out this duty, and encourage them to help other young people take an active pride in Palestine’.  Sharek and Screening Rights would seem made for each other, and that is certainly what struck me during a first meeting with the organisation last summer.  The aim of the project we developed is for young Palestinians to learn how to create short films with their smart phones, short films that are critically aware and personally-socially-politically important. (Here, those 3 adverbs seem pretty hard to separate.) Four universities in the West Bank are taking part, and I’ll spend one day a week with each for the next 3 weeks. The best film from each University will compete for a place on the programme of the Screening Rights Film Festival in September. The winner will be decided by the participants in Sharek’s Tammyaz programme, of which this project is a part.

The filmmaking project was meant to be based on the MOOC that my colleague Richard Langley and I did with the BBC Academy this last year: ‘Digital Storytelling: Filmmaking for the web'(https://www.futurelearn.com/courses/digital-storytelling).  It’s running right now and is, or would be, a really useful tool for the students and for me. Trouble is, at least in the group from Al-Quds Public University who I spent day 1 with, no one had looked at it yet and the standard of English (and chattiness, while I’m at it) amongst those present really varied. So the day was an adventure for all of us. We explored what makes a good story and what makes a story good, that is… honest, ‘true’, not offensive, not twisting history etc. What I might, in other circumstances – or in our next session together – call ‘ethical’. (I would later talk this through with my arabic teacher to try to find a better way of expressing it.) We analysed examples from Braveheart (Mel Gibson, 1995) to Omar  (Hany Abu-Assad, 2013). Dividing into groups, the students started to think about what simple story they wanted to tell, what skills they had amongst them to draw upon, and how they might avoid the pitfalls but harness the power of film.  All in a short short but smart (phone) film.  Not a tall order at all.

Thanks to Amin, who is helping with the workshops and providing much needed translation and who I’m meeting at 8am tomorrow to travel to the University in Nablus to do it all again with students there.